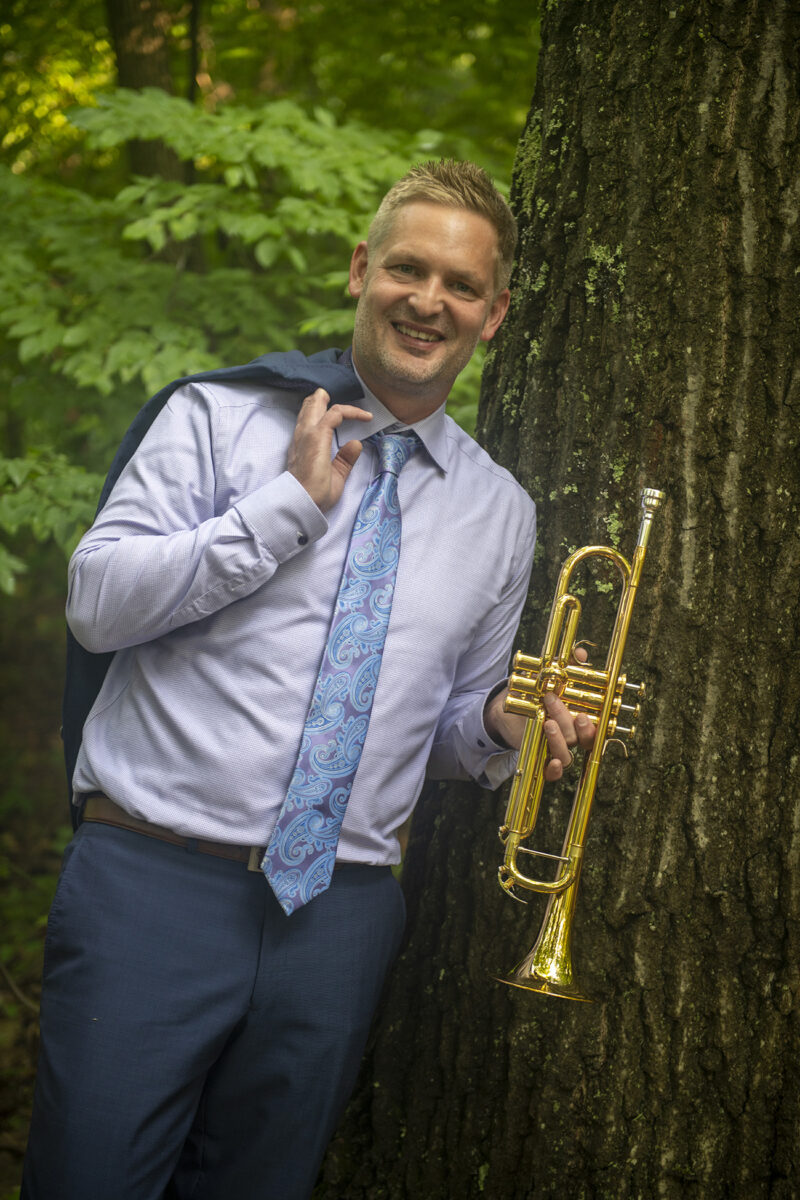 Dr. Christopher Wilson has served as the Principal Trumpet of the Pittsburgh Opera Orchestra since the 2017 season. Additionally, Wilson is the Principal Trumpet of the Chamber Orchestra of Pittsburgh, a frequent performer with the Pittsburgh Symphony Orchestra, and is on the trumpet faculty at Duquesne University. Wilson’s performances have been called “eloquent” and “masterful” by The Journal of the Music Critics of North America.

Wilson is an active soloist, performer, and clinician. He has performed and taught clinics throughout the United States, Italy, and Japan, including multiple featured performances at International Trumpet Guild Conferences. Wilson has been a soloist at two College Band Directors National Association events that included world premiere performances of Daniel Tacke’s Landschaft mit Kanonen and David Sampson’s Serenade for Trumpet and Wind Ensemble. Wilson released New Horizons in 2013, a solo album of new original recital pieces and commissions for trumpet. The album was featured on National Public Radio as its “delight of the week.” He has participated in numerous commissions and consortiums that include composers David Sampson, James Stephenson, Kevin McKee, Daniel Tacke, and Sy Brandon.

Wilson has performed with many orchestras, including the Nashville Symphony Orchestra with which he performed on a Grammy award winning album for Best Classical Compendium in 2018. The album, entitled All Things Majestic, featured composer Jennifer Higdon’s music. Other orchestral performances include appearances as guest principal trumpet with the Arkansas, Memphis, and Wheeling symphony orchestras.

As an educator, Wilson was formerly Artist/Full Professor of Trumpet at Arkansas State University for 11 years where he built a nationally competitive trumpet studio. The A-State trumpet ensemble advanced to the quarter-final and semi-final rounds of the National Trumpet Competition in Denver, CO; Dallas, TX; and Lexington, KY. Additionally, Wilson actively teaches students who aspire to win military band positions through a course that he created, The Military Band Trumpet Summit. Wilson’s students have gone on to professional performing careers, positions in military bands, prestigious graduate schools, and many successful music education careers.

In addition to his teaching at Duquesne University and Arkansas State University, Wilson has been a clinician and faculty member at the Bands of America Summer Symposium; the Orvieto Musica Festival in Orvieto, Italy; the Tennessee Governors School for the Arts; and the Oklahoma Summer Arts Institute at Quartz Mountain.

Wilson was also a member of the United States Air Force Band, Washington, DC, where he was a featured tour soloist performing the Arutunian Trumpet Concerto. He has performed for numerous dignitaries and audiences around the world, including Presidents George W. Bush and Barack Obama. In 2004, he performed at the funeral of former President Ronald Reagan. Live television broadcasts include a Veterans Day Celebration at the Strathmore Concert Hall in Bethesda, MD, which aired on PBS in 2008; and a Memorial Day performance at the National Capitol, which also aired on PBS in 2006 in collaboration with the National Symphony Orchestra.

Wilson received the doctoral degree in trumpet performance at The Catholic University of America in Washington, DC, where he studied with Steve Hendrickson and Charles Daval. He earned the masters degree in performance and the bachelors degree in music education at the University of
Arkansas, where he studied with Wiff Rudd and Robert Bright. Wilson is a Yamaha Performing Artist/Clinician.

In addition to his performing and teaching, Wilson also has an active YouTube channel where he publishes content each Friday on all things trumpet, with a focus on fundamentals, performance, pedagogy, and audition strategies.

“My time with Chris can be best described as a time of major growth. Years later, I am still discovering things that he taught me.”

“His passion for teaching and performing is what drives me to become the best performer and future educator that I can be.”

“Dr. Wilson gave me the skills and confidence to perform to the best of my abilities. I am a better person and musician as result of studying with him.”

“Dr. Wilson is a wonderful teacher. In every case, he knows exactly what I need to do to improve.”

“Dr. Wilson is an amazing role model for his students, and he is always willing to offer advice and encouragement.”

“Christopher Wilson is an excellent teacher and I improved so quickly as a result of working with him.”

“Dr. Wilson is wonderful at encouraging his students and at the same time pushing us to do things that we didn’t believe were possible.”

“He is an incredibly well-versed musician and teacher, especially on how to approach auditions and recitals. I learned so much from him.”

“After spending time with Chris Wilson, I dramatically grew as a musician, specifically as it relates to being prepared for performances.”